An Update and Free Coffee Sleeve Pattern From ‘The Crochet Dude’ 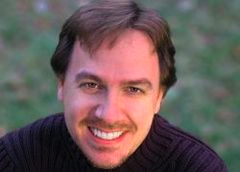 This week my Grand Rapids Press art & craft column is about Drew Emborsky, a.k.a. “The Crochet Dude.”

I first interviewed Drew for episode 15 of the CraftSanity podcast, so it was fun to check in with him again.

He’s come a long way since we recorded the podcast and still crocheting up a storm.

Here’s how the column starts:

As a shy teen walking the halls of Saugatuck High School in the early 1980s, Drew Emborsky never imagined he would be receiving fan mail two decades later about his passion for crocheting.

“When I was in high school, I didn’t go around saying, ‘I crochet,'” he said.

Now he’s the Crochet Dude, and can’t stop talking about it.

Read the rest of the column.

I wasn’t popular in high school either, so I LOVE stories about people finding their groove later in life. God bless the Internet and the way it lets us craft geeks unite.

Drew has contributed to several books and magazines in addition to his work as a pattern designer for several yarn companies. He’s also appeared on several HGTV and PBS television programs and most recently was cast as the crochet expert on PBS’ “Knit and Crochet Today” for seasons three and four. (I got to meet up with Drew and the rest of the cast when they were taping the show in Detroit. So fun!) 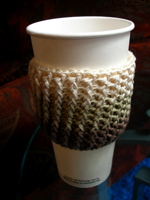 Free Pattern! Get out your crochet hooks, folks. In the spirit of holiday giving, download Drew’s free crochet pattern for coffee sleeve and make one for yourself and a java-loving pal. Thanks Drew!

A Handmade Holiday at Home

hello there and thank you for your info – I’ve certainly picked up anything new from right here. I did however expertise some technical points using this site, since I experienced to reload the website lots of times previous to I could get it to load properly. I had been wondering if your web host is OK? Not that I am complaining, but sluggish loading instances times will very frequently affect your placement in google and can damage your high-quality score if advertising and marketing with Adwords. Anyway I am adding this RSS to my email and could look out for a lot more of your respective exciting content. Ensure that you update this again very soon..

Excellent goods from you, man. I have understand your stuff previous to and you’re just extremely magnificent. I really like what you’ve acquired here, really like what you are stating and the way in which you say it. You make it entertaining and you still care for to keep it smart. I can’t wait to read far more from you. This is actually a terrific web site.

Hey! I just wanted to ask if you ever have any problems with hackers? My last blog (wordpress) was hacked and I ended up losing several weeks of hard work due to no data backup. Do you have any solutions to prevent hackers?