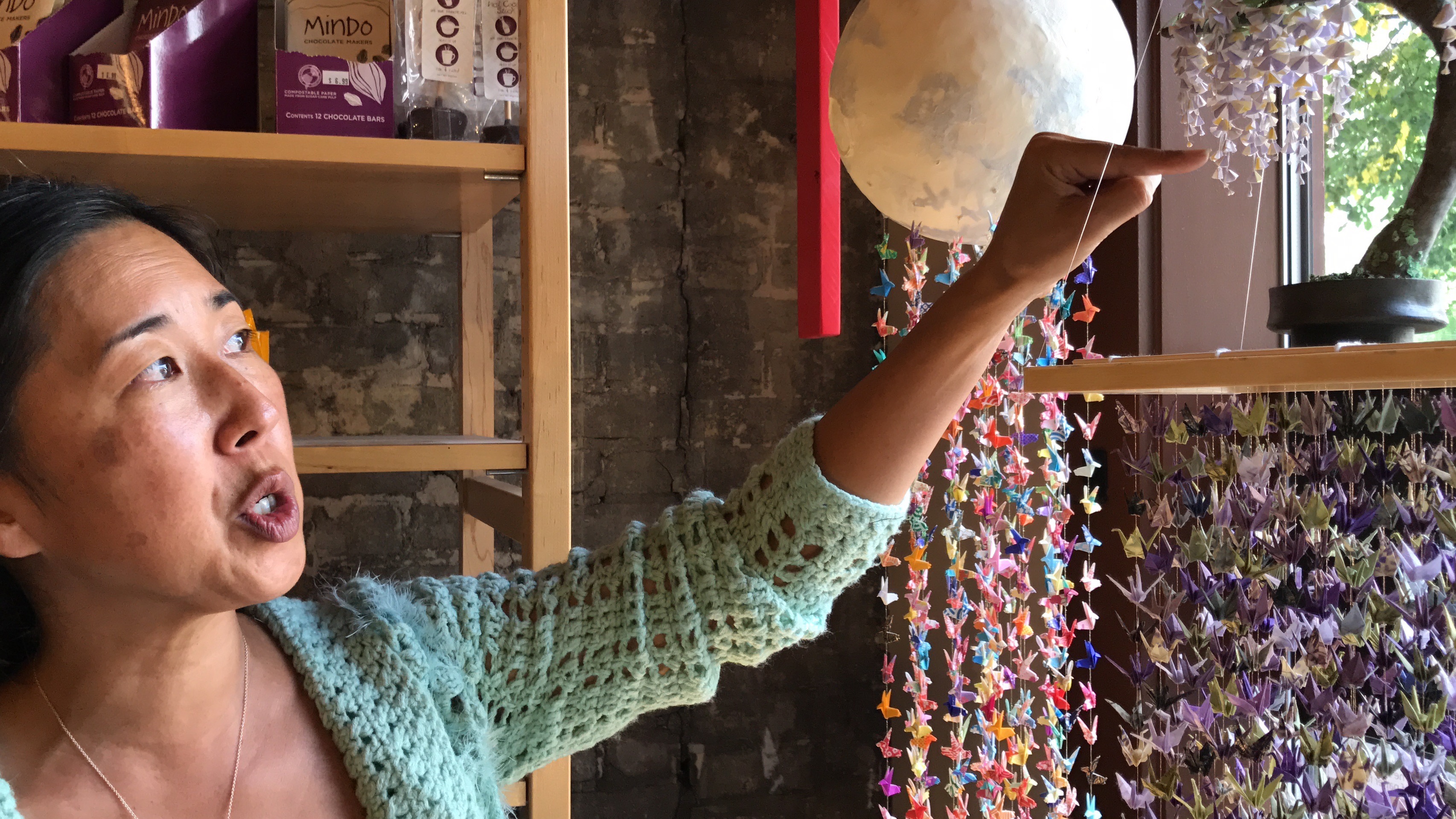 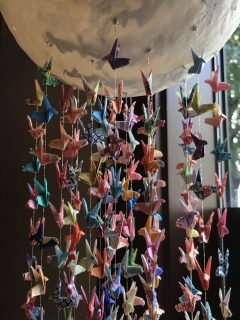 While many artists like to go big with their ArtPrize entries, Stacie Tamaki strives to work as small as possible.

“Rather than seeing a man in the moon, in Japan they see rabbits in the moon,” said the Greenville artist, explaining how some interpret rabbit-shaped dark patches on the moon’s surface at night. 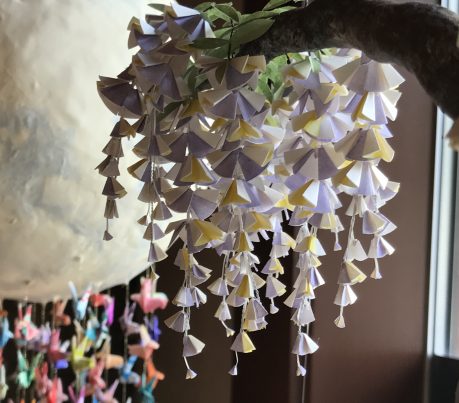 Tamaki started creating tiny origami after helping with a 1,000-crane wedding installation created by folding much larger pieces of paper.

“I just thought, ‘how small would you have to fold them to put it in a display case?'” Tamaki said, recalling the question that inspired her to create 1,000-piece mobiles that can be displayed long-term without getting dusty or taking up a lot of space.

Her three-mobile installation is a work in progress that she will be adding 450 more “tinygami” pieces to throughout the week as she greets ArtPrize goers who visit the Grand Central Market & Deli venue at 57 Monroe Center NW. Tamaki’s work can be viewed from the street, but the work is best examined up close. 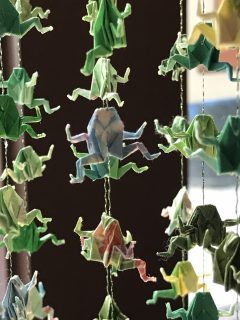 When she’s finished, Tamaki’s installation will include 1,000 tiny paper rabbits strung together and hanging vertically from a paper moon, 1,000 paper cranes dangling below a paper bonsai tree and another 1,000 paper frogs strung below the paper depiction of a pond of lily pads and flowers.

The installation has required hours of precise paper cutting prep and then several minutes to fold each individual piece. Once the folding is done, Tamaki combines the pieces into an impressive display.

Shortly after ArtPrize began, Tamaki folded a tiny frog to demonstrate the process for a curious group of women who stopped to photograph her work.

“Last year for ArtPrize was the first time it ever occurred to me to try make them even smaller,” said the artist who is participating in the competition for the third year in a row. “So now –  I have not perfected it –  but I have like a 50 percent success rate of folding a quarter inch high crane out of a half inch square of paper…It’s tedious.”

Tell me what I should make with all this Kaffe Fassett fibric and I might give you some. : )

Another great interview Jennifer! I’ll be sure to check out her display at my favorite lunch spot.

Hi There! We are looking for some people that are interested in from working their home on a full-time basis. If you want to earn $100 a day, and you don’t mind writing some short opinions up, this might be perfect opportunity for you! Simply check out the link here NOW! Sincerely,

Log in to Reply
CraftSanity Podcast Episode 190: A conversation with ‘Tinygami’ mini origami artist Stacie Tamaki – CraftSanity – A blog and podcast for those who love everything handmade October 20, 2016 - 7:04 am

[…] I had been admiring Tamaki’s artwork from afar until we finally had a chance to meet last month during ArtPrize 2016 in Grand Rapids, Michigan. (Read my previous post about her work here.)  […]

Really enjoyed this post – thanks Jennifer and Stacie! Lovely work.

Hi my friend! I want to say that this article is awesome, nice written and include approximately all significant infos. I’d like to see more posts like this.

When I originally commented I clicked the “Notify me when new comments are added” checkbox and now each time a comment is added I get four emails with the same comment. Is there any way you can remove me from that service? Many thanks!

Hey there! I could have sworn I’ve been to this website before but after reading through some of the post I realized it’s new to me. Anyways, I’m definitely happy I found it and I’ll be bookmarking and checking back frequently!

You completed a number of fine points there. I did a search on the subject and found a good number of people will go along with with your blog.

Hello there, I found your web site via Google while looking for a related topic, your website came up, it looks great. I’ve bookmarked it in my google bookmarks.