ArtPrize 2010: The Ultimate Opportunity To Blur The Lines Between Art & Craft 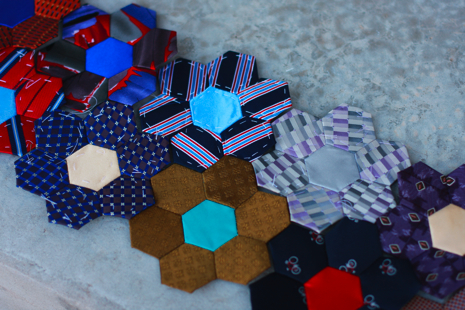 I’m working on a hexagon quilt called “Power Ties in Bloom” made out of neckties that will be displayed at the David D. Huntington YMCA in Grand Rapids Sept. 22 – Oct. 10.  The ties were collected by Safe Haven Ministries, a local agency that aids  victims of domestic violence. 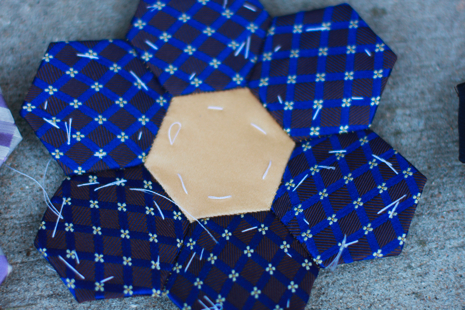 The ties came from business leaders, lawyers, politicians, university presidents – some of them very rich men. It’s a strange thing to be taking my rotary cutter to a box of ties labeled with names. The box represents kind of a who’s who of West Michigan. As a I cut and iron and stitch, I wonder where the ties were worn and what the previous owners would think if they could see me tearing them apart with my seam ripper. 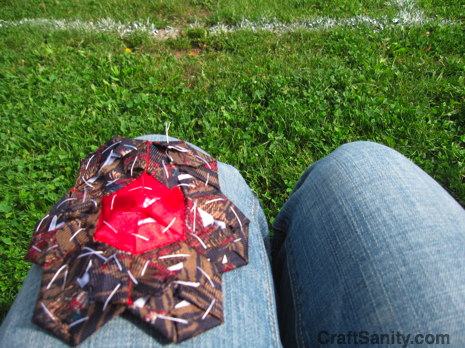 This quilt project grew out of my Fifth Third River Bank Run Road Warrior experience. After I was partnered with Safe Haven Ministries, I agreed to make a quilt out of the ties. The project started this spring when I made kits to distribute at a couple quilt bee sessions during which small groups of women helped me stitch the first 20 or so blooms. Recently, I’ve slowed down on the kit making. Instead, I’ve elected to reward myself with some quiet stitching time on the sidelines at the soccer field and on the pool deck while the  girls are in lessons. Making the kits is not nearly as fun as stitching the hexagon blooms. I swear I could stitch those all day if I had the time. We’ll see if I feel the same way about paper piecing after I put this project to bed. (Let me know if you’re local and interested in helping me stitch. I’m recruiting willing volunteers. Everyone who helps will be credited for his or her work.)

I have no grand illusions about winning the $250,000 top ArtPrize award that is decided by public vote, (Last year’s winning entry is amazing.) but I’m excited to participate this year and continue to raise awareness for a local agency that is ready to help women and children in need of counseling and safe housing. Proceeds from the sale of the quilt will go to Safe Haven.

Recently I was chatting with a friend about the challenge of balancing family life, running, freelance writing, loom sales, podcasting and all the other aspects of my business with charity art projects.

“I thought you were supposed to get rich first and then start doing a bunch of charity work,” he said.

“Yeah, I kinda skipped that part,” I replied, laughing.

And, honestly, I’m cool with the way things have played out. I don’t have to deal with the stress of being wealthy and I really enjoy dreaming about things that are financially out of my reach like traveling the country in a slick, shiny Airstream and crafting with people at each stop and sipping lemonade while crafting with family and friends on the giant wrap-around porch of an updated farmhouse overlooking water (a small pond would do). But I’m going to be more than fine if I never get that stuff. I own my dreams and that’s enough right now.

Maybe the best part of being rich is being in a position to make dreams come true for other people. I don’t have the cash flow to be a full out dream maker, but I try to give people a boost when I can.

And because I can’t seem to ever stop myself from offering unsolicited advice, I want to encourage you, dear readers, to enter ArtPrize, too. Go ahead and fling yourself out there on the international art stage. Last year’s competition was amazing fun to witness as a spectator. I expect it to be even better this year. The artist registration deadline is June 17. Good luck! :  )

We are big tea drinkers but most Texans are Tell the hbausnd he has me driving down the road laughing!Here is how I make iced tea. Take a small pan (1-2 quart) and fill half full with cold water and add 2 family size tea bags. Bring to a boil and remove from heat and cover with a lid. It will be bitter if you actually let it stay on the stove. Make sure you let it set for at least 5 minutes (for increased caffeine). I use 10 small sweet n low packs for a gallon of tea but some of my kids use 1 1/2 or 2 cups of sugar in theirs. I will refrigerate over night only one day. After that, the taste is dramatically different (bad) and I throw out what is left.Cindy

American Ultimate Cheeseburger – Paleo Style July 17, 2012 By Rhea Leave a Comment I mentioned the other day that Sargento was having a little fun with the classic American Cheeseburger.Â  They have enlisted

I’ve had the same experience with some New Agers. Not all of them, but there is a definite falseness to many, and with those people, I find them to be covertly angry and destructive because they have disowned their “shadow”.

I've been using this for the past year or so (when I'm not using my Garnier Summerface)and it works great for me too. It really makes a fab basic, everyday moisturiser. I also use it to sheer out the coverage of my Revlon Colorstay (which I think you also just did a post on haha) And I couldn't have put it better myself – just totally unoffensive :)