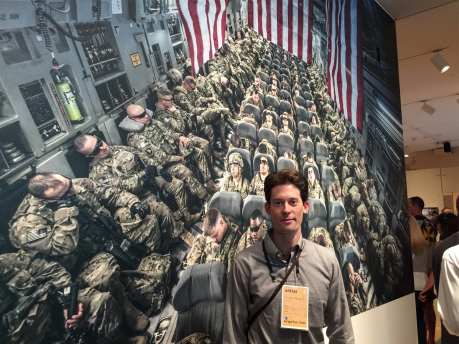 Ludington-based photojournalist Ryan Spencer Reed documented the lives of the 1-506th Infantry Regiment as the soldiers trained for battle and deployed for active duty in Afghanistan. An installation of 61 of his photos comprise his “Despite Similarities to Reality, This is a Work of Fiction” ArtPrize entry at the Grand Rapids Art Museum.

The beautifully composed photo was taken by Ludington-based documentary photographer Ryan Spencer Reed on May 5, 2013, and even though I was viewing it more than a year after the fact I still felt compelled to tell the soldiers not to go. When I later learned that five men were killed in action during the deployment, I went back to look at the photo again and wondered if the fallen were pictured among the quiet soldiers, some sleeping, many hiding their eyes behind dark shades.

This photo that made me wish I had the power to stop a war is just one of 61 photos in Reed’s powerful ArtPrize installation titled, “Despite Similarities to Reality, This is a Work of Fiction,” one of five installation pieces eligible for the $20,000 Installation Public Vote award and one of 20 pieces in the running for the $200,000 public vote grand prize.

While the title raises questions about the content of the photos, they are all depicting real events. 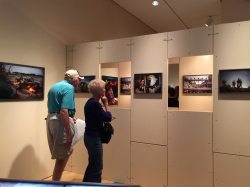 “There’s a lot that people aren’t seeing,” said Reed, 35, a 2002 Calvin College grad who spent nearly a year building a rapport with the members of the storied regiment known as the “Band of Brothers” before deploying to Afghanistan with them. “…Ultimately the title referring to the fact that this may be a work of fiction is in part a disclaimer of my own work in a sense that it’s heavily edited by the time it’s offered up to the public for consumption.”

Reed’s quest to understand the life of a soldier and his family’s own tradition of military service led him to immerse himself in this documentary project and pursue a true understanding of war – something average citizens can’t get from mainstream media.

“It doesn’t have to be some insidious lying on behalf of our military or lying on the behalf of the media or bending the truth or anything like that,” he said. “When you only have 1 percent of (Americans) prosecuting your wars for you, you will have fewer and fewer people understanding the true cost of war.”

Read the rest of my column at MLive.com and tune into this podcast to hear Ryan tell this story in his own words below. 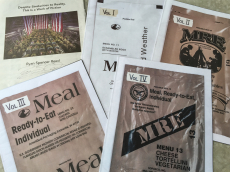 The public can purchase Reed’s four-zine collection containing 60 of the photos from his ArtPrize installation for $20. Or, if your unable to get to the exhibit in person, order the collection via his website.

Super-Duper website! I am loving it!! Will come back again. I am taking your feeds also.

Hi there, I found your website via Google whilst looking for a related matter, your web site got here up, it appears to be like good. I have bookmarked it in my google bookmarks.