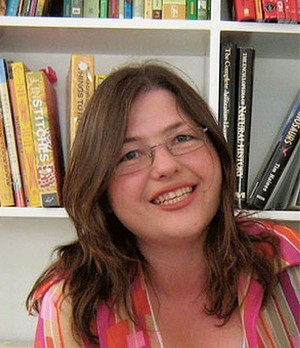 I don’t usually listen to my old podcasts, but today I listened to episode 19 an interview I recorded in 2006 with Kathreen Ricketson, the whipup.net creator, author and mother of two. Back then our kids were little and we talked about motherhood and crafting and the adventures she had before she become a mom. I still can’t believe she’s gone.

As many of you have heard by now, the craft world lost a major force last week when Kathreen, 41,  and her husband, Robert Shugg, 48, died while visiting a beach located south of Coral Bay. They were traveling around Australia and Kathreen was writing a book about their grand adventure. News reports are linking Kathreen’s death to possible contact with a deadly jellyfish. Robert is still missing. It’s  surreal to hear that their adventure ended this way.

Kathreen and Robert are survived by their 13-year-old daughter, Otilija and 10-year-old son, Orlando. And the craft community is doing what it can to support the children during this time of unbelievable sadness. The details of how you can help can be found here.

While episode 19 was recorded during my rookie year as a podcaster and therefore a bit rough around the edges (thanks to me), it was nice to get to hear Kathreen’s voice again and listen to her talk about her love of photography and crafting, her work and family life.

Since our chat, Kathreen went on to write several books including “Whip Up Mini Quilts” (Chronicle 2010), “Little Bits Quilting Bee” (Chronicle 2011) and a series of children’s craft books for Hardie Grant. And most recently she published a downloadable pdf magazine for kids called Action Pack.

I am sad about her passing, but I remain inspired by her adventurous spirit and all the contributions she made to the international craft community. In many ways, she brought us togeher. Now let’s do what we can to keep her spirit alive in the community she helped build.

Collaborate. Swap recipes. Take pictures. Share what you like. Learn with your kids. Bring people together. Whip up stuff. Find something small to celebrate each day.

You can listen to the interview here.