A Crocheted Flower and a Reminder: CraftSanity Magazine Issue 3 Advertising Deadline is May 1. 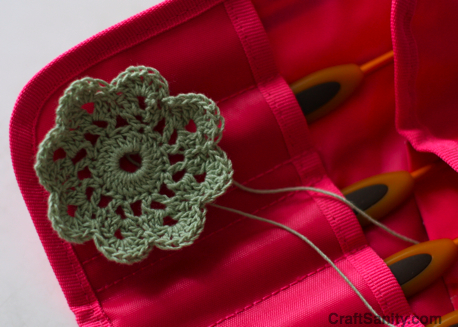 Spring break is over and I’m in denial. I love it when we can wake up on our own with no alarm clocks and let our days unfold as they will. There were a few squabbles during our staycation, but for the most part we had a great week. And today we ended on a major high with 80-degree weather. Bonus!

The end of the break means we’re getting closer to the advertising deadline for the summer issue of CraftSanity Magazine. Here are the rates for those who are interested:

I’ve also updated the advertising information for placing ads on CraftSanity.com and the CraftSanity Podcast. All the rates are posted here.

And if you’re curious about the crocheted flower above. You can find the pattern here. I want to make a whole stack of these happy flowers. So pretty!

Daffodils, Giveaway Winners and a Whole Lot of Yarn

Video: Why failure is a necessary part of...

The QQ hand is really iiserettnng. The value of knowing someone’s hand isn’t just good because you can make them fold when scare cards come, but that you can extract max value when you make a better hand. ScreaminAsian did a good job explaining his thought process as far as getting them to fold to scare cards, but he didn’t mention the part about getting max value if his 42 made the best hand. Let’s say the final board is 245JT with a flush possible, and screamin only knows a range of hands his opponent could have, which might be rather wide depending on the opponent. If his opponent is playing his hand strongly, and screamin doesn’t know his opponents cards, he will likely not get max value from his bottom two pair, as he’ll have to fear a set, a better two pair, a flush, or even a straight if the guy might raise a hand like A3 suited. Screamin would likely come to the conclusion that if he were to raise the river, his opponent would probably only call with a hand that beats his bottom two. Heck, Screamin might even fold the best hand, fearing he’s beat. But if Screamin knows his opponent has QQ, he can get max value. If his opponent bets the river, Screamin can raise with impunity, and even though his opponent might not call very often, he’ll reap the benefits of those occasions which his opponent does indeed call. He misses out on those occasional spots where his opponent would have called with just QQ on the river. He also will never fold the best hand. Another benefit is that he knows exactly how much to slowplay if he flops a big hand. Let’s say the flop is A35 with all hearts, and the opponent doesn’t have the Q of hearts. Normally, screamin might make a big raise on this flop, fearing a single heart in his opponents hand. But in this case, Screamin would want his opponent to improve, since there is no card in the deck that can beat him on the turn. The Qd hitting would be great, and the Qh hitting would be good also, since the opponent would put money in on the turn, and maybe also the river if he doesn’t fill up, and we could fold our straight on the river if he makes a full house. We also don’t have to worry about a free card killing our action, since our action is already dead. Our opponent is not calling a raise on this flop anyway, and he’s probably not calling a bet if he decided to check to us. Let me give another example, this time hypothetical. Let’s say you are playing 130bbs, and open the pot in middle position for 3.5bbs with 88. A tough player that has you covered makes it 9.5bbs behind you. This player is the kind that will be able to use his position to get you to fold the best hand sometimes, like when he has AK, AQ, or maybe just a random hand he decided to 3bet but missed the flop with, but will also maximize his value when he does have a big pair and you get stubborn with your 88 that didn’t flop a set. He is also good enough to sometimes fold an overpair, especially those smaller than KK. You’re going to get outplayed a ton here. Even when you slop a set, you’ll occasionally lose to a bigger set, which you won’t see coming. He’ll certainly fold his AK, AQ, etc that missed the flop, or he might just fold QQ, even KK, so you get very little value from your set. Let’s also say that this particular player tends to lose a lot when his AA gets outflopped, but will fold when the board gets really scary. What would you prefer this opponent to have? His entire 3 betting range, which you’ll be making educated guesses at preflop, or AA, where you saw his cards preflop? I think a case can be made that it’s better that your opponent have AA and you know he has it. You’ll fold every time you get set over set. You’ll fold almost every time that you don’t flop a set, since you know he loses a lot with AA if it gets beat, but doesn’t like to lay in down, whereas against his normal range, you’ll be folding the best hand a lot, and paying off with the worst hands a lot if you try to overcompensate for him pushing you off the best hand too often. When he has the AA, you know that hitting a set rates to get you paid. You may occasionally get boards where he’ll lay down the best hand, like QJK, all of hearts, when he has black aces. You wouldn’t try to get a random hand from his 3-betting range to fold here, since that is probably a very good flop for his 3-betting range, you just won’t know.You will never lay down the best hand, which could be relevant if you flop a set and the board comes four to a flush or straight. You will know your opponent doesn’t have the flush or straight, so you can valuebet or raise the end, whereas the board might have got too scary for your set if you didn’t know what he had. It seems backwards, that I’d prefer to play against an AA that I know my opponent has, rather than only being able to guess at his range, which will include hands which 88 does well against. AA is a great hand, it’s more than twice as profitable as the next best hand KK, but when I know it’s what they have, and I’m getting great implied odds, with a suited connector or pocket pair, my opponent is in a lot of trouble with their AA.