Today I Became a Hardcore Knitter 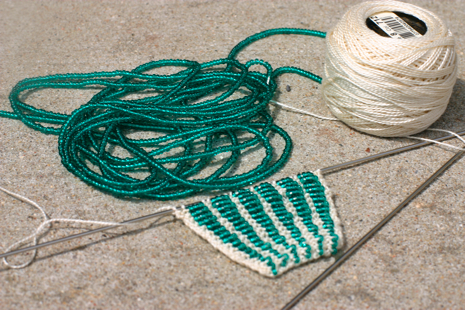 Last night I thought this project was going to kill me. I was swearing up a storm trying to transfer itty-bitty glass seed beads onto a strand of size 8 perle cotten and thinking people must be insane to knit projects this small. I was watching (okay mostly listening) to an episode of “The Wire” on DVD and transferring dainty beads onto thread. The episode ended before I had that part of the project squared away, but I finally figured it out without losing my mind or too many beads.

Then things got serious. I got out the 0000 needles I bought yesterday and started knitting. In that initial awkwardness of feeling like a super-sized knitter with giganitic fingers using tiny needles belonging to a sprite, I knew I had crossed over to the place some knitters never go: I crossed over to crazy. I felt like I was riding a motorcycle blindfolded or something because it took my eyes a bit to adjust to the smallness of it all and the dangerously stupid part was how I kept using my mouth to move the beads up the thread closer to the needles, which in turn put the sharp needle points very close to my eyes. (I’m sure this is probably the stupidest way to move the beads, so please don’t try this at home.)

I don’t care what anyone says, you have to be seriously hardcore to knit this dainty stuff. I would have continued life in the dark about his had my weekly newspaper craft column not forced me to once again expand my craft horizons.

I probably never would have tried to knit with needles this small if I didn’t have to test the pattern for an upcoming craft column. I used to think people who used 0000 were nuts. (Now, I know they are and proud to be one of them.)

I wasn’t sure I was going to be able to dig deep enough to muster patience and skill required by this project, a small amulet necklace. The artist who wrote the pattern (and does amazing work by the way), told me that this micro-knitting is part of her spiritual practice. This took me a bit to grasp since my initial fumbling and swearing had me feeling like I was on the fast track to knitting hell.

But then something happened. I relaxed and surrendered to the project. I stopped trying to fight the pattern and rewrite it from a point of confused ignorance. (Taking patterns “under advisement” is one of my time-wasting bad habits. Don’t do it, especially when knitting with 0000s.) Once I committed to following the pattern, something unexpected happened. I started to enjoy my mini-knitting. I loved it, in fact. (Well, all except for the transferring of beads part. That was for the birds, but the knitting with beads kind of rocked.)

I’ll be posting my finished project along with links to my art & craft column on the bead knitting artist with Michigan ties in this space next weekend, so stay tuned. I’ll also be posting the pattern for an amulet bag that I tested today. It’s a good one. It might make you swear at first, but if you stick with it, it will challange and inspire you. And if you’re able to successfully complete this challenge, you will have earned the right to feel like a total bad a** knitter for at least a few hours. (I completed a basic pattern and strutted around my kitchen a bit this afternoon because I seriously didn’t think I could do this. Now I’m planning my next bead knitting experience.)

All you knitters who knit on 0000s like it’s no big deal, I salute you! R-E-S-P-E-C-T! And those of you who use those little sprite needles to make amazing beaded jewelry and purses. You people rock! I didn’t realize it until today, but that is some hardcore knitting.

(See I told you this experience changed me. Time to go try to lift up my car and slam a Pepsi.)