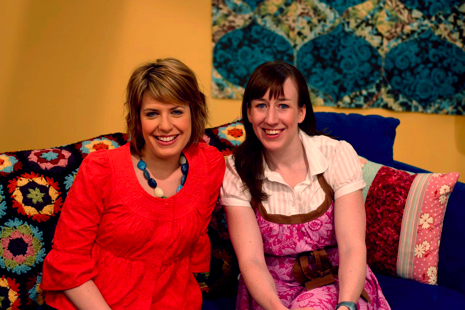 Today I drove to Detroit PBS to tape a mini interview with Brett Bara, the editor of “Crochet Today!” magazine and host of the nationally broadcast PBS show “Knit and Crochet Today.”

Here’s the kicker: She interviewed me.

Crazy, I know. I was sitting there on the cool blue couch on the set, sporting makeup and styled hair (Thanks, Jacquie!) and one of my aprons, soaking of the strange reality of being a guest on an actual TV show to chat about my podcast. I can’t remember what I said exactly during my five to seven minutes of talk time, but I hope the talented folks at PBS are able make me look good. They certainly made me feel welcome and were very cool about the coughing jag I launched into near the end of the interview. (Sorry guys!)

Even though my sinuses weren’t cooperating, I really enjoyed my visit. (I’ll let you know when the show will air as soon as I find out. In the meantime, you can call your local PBS station to request that they add “Knit and Crochet Today” to their line-up.)

Thursday night I got to catch up with the Drew Emborsky, a.k.a, the Crochet Dude, who I interviewed for CraftSanity Episode 15. That was like 61 episodes ago, so we had a lot to talk about. We dined at the Traffic Jam & Snug Restaurant in Detroit with Brett and Kristin Nicholas (my guest on episode 70). From the left, here’s a shot of Kristin, Brett, me, and Drew all looking very tired. 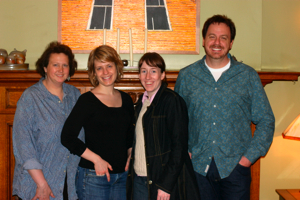 We had great conversation and lost track of the time. The next thing I knew I was calling my mom to explain myself. It’s been about a decade since I’ve felt the need to do that. (She was kindly looking after my girls in the burbs where I grew up, while I enjoyed a craft-related night on the town. Thanks mom!)

Kristin played a key role in getting me on “Knit & Crochet Today.” After I interviewed her for the podcast, she kindly suggested to her friend and “Knit & Crochet Today” producer Candi Jensen that she ask me to be on the show. And then Candi did. After the taping, I had one of the kind PBS guys snap a quick photo for us. 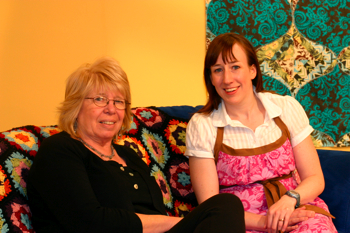 So, overall, today was a pretty interesting day. The only serious downside was Abby getting sick at her 4th birthday pre-party at Nana and Papa’s house. That was a major bummer for her. She didn’t even get to finish her cupcake.

After I told her I was going to be on “Knit & Crochet Today,” Abby asked if I could get her on an episode of “SpongeBob.” It’s funny to think she believes I have those kind of connections. Hey, Kristin, let me know if you have a friend you can call. : )

And just because I’m a total craft nerd who is very grateful for the opportunity I got today to visit the set of a PBS show and talk about pipe dreams with people in high places, I’ll sign off with this self-portrait… 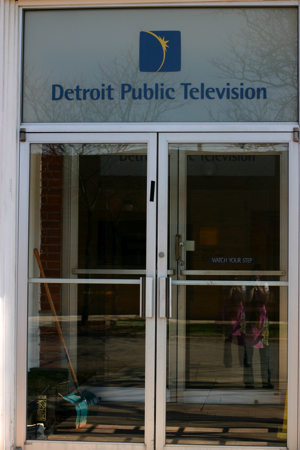 Who Knows How to Make Bobbin Lace?

CraftSanity Podcast Episode 186: A conversation with ‘Inside...

Howdy, i read your blog from time to time and i own a similar one and i was just curious if you get a lot of spam comments? If so how do you stop it, any plugin or anything you can advise? I get so much lately it’s driving me crazy so any support is very much appreciated.

As a Newbie, I am always browsing online for articles that can aid me. Thank you