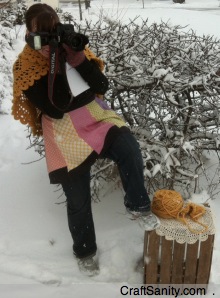 For the last couple months I’ve been preparing to write my last art and craft column for the local newspaper I’ve been writing for since 1998. After I received a contract termination letter in early November, I resigned myself to the fact that I had been canned from my freelance position.

This was a first for me. Until that letter arrived, I had never been terminated from a job – ever. Even though the newspaper was terminating all the freelance contracts and intellectually I knew the letter was not intended as a personal attack, I couldn’t help but feel like a total loser.

The letter mentioned that someone from the company might “reach out” if they wanted to continue working with me, but I wasn’t holding my breath. I surrendered to the universe and did not plead for my job or try to make a case for why they should keep me on when the reorganized newspaper company launches in early February. Instead I just focused on moving on, wondering what I would feel like once I shed my newspaper columnist title. Even though I’ve been publishing my own magazine for more than a year, it’s nice to have a legitimate title that I didn’t make up myself. There’s a certain credibility in that.

Last week, my husband and I went on a walk around the neighborhood during which we brainstormed ways to expand my handmade business and publish more of my work. I also lamented a bit about how I was going to thank my readers for giving me the opportunity to write exclusively about what I loved for roughly three years. Had they not responded positively, the jig would have been up much sooner. How was I going to wrap up the best print journalism gig I’ve ever had?

Turns out I won’t have to figure that out – at least not yet. Jeff and I returned home from our walk to find a thick envelope in the mailbox. It was a contract for me to keep writing my column for an expanded statewide audience.

“You’ve got to be kidding me,” I said, not sure what to make of it.

It’s no secret that I LOVE writing about art and craft, so it should come as no surprise that after a couple days of reflection, I decided to take the company up on its offer. (And, yes, I am aware that this opens me up to the very real possibility of being terminated from the same gig a second time.)

The strange part is that I still feel like I’ve had the wind knocked out of me. It really stunk to receive a termination letter followed by weeks of corporate silence. I had no reason to believe I would be part of the new media product and I was preparing myself to show as much grace as possible in the event that a lower-priced replacement writer was brought in. I just prayed that he or she would at least know the difference between knit and crochet. I had trouble sleeping even though I was telling people that I was “moving on.” And despite the fact that the newspaper column is not a lucrative gig by any means, it’s more than just a job to me. I love talking to people about what they make. I enjoy having a weekly dialog with newspaper readers, and I have a special place in my heart for those who don’t have any desire to go online and follow me on Twitter.

And, sadly, I’m one of the lucky ones. Many of my former colleagues lost their jobs in the latest round of cuts (or the two or three rounds before that), with many of them deciding to call it quits and exit the unstable journalism industry once and for all. As a society we lose each time another seasoned journalist loses a job or decides to change careers.

I’m not sure how long it will take for the industry to stabilize, but I hope it happens soon. Journalism is key to protecting our democracy. (Yes, I recognize that my column is more entertainment driven than democracy-protecting, but you get my drift. And for the record, I’ve done my share of hard news coverage and still perfectly capable of it.)

So I guess this means I’m back, even though I never actually left. My apologies to those who I upset with news of my termination. Now I’m wishing I could have spared you all the drama. And thanks to all of you who have written kind notes and said encouraging things about my work. I continue to be amazed by the kindness of strangers and kindred spirits who seem to know exactly when to send me a show of support. Thank you so much!

I’m grateful for the opportunity to continue to be a newspaper columnist and plan to make the most of the experience while it lasts. I hope you’ll come along with me on this next leg of the journey. Since my new audience stretches beyond West Michigan, I plan to adjust my coverage accordingly and I’m excited to see where this leads. You’re invited to send your story ideas to jennifer@craftsanity.com and help me cover the art & craft in the mitten like never before. You can start by introducing yourself and telling me what you make.

P.S. I had my husband take the ridiculous photo at the top of this post in the freezing cold after I signed my new contract. I don’t usually sport giant doilies on my back AND rainbow aprons when I go out on column interviews – although that would explain the initial termination. : ) I also don’t draw very well, so the photo was my attempt at creating a caricature of myself. Did it work? Not so sure. Ah, well, celebrate your quirks, my friends.

A few things before I get back to work…

Reviews: Inspiring craft books to check out as...

CraftSanity Review of the Juki TL-2010Q

CraftSanity Podcast Episode 136: A story about how...