If you’re still having difficulty accepting the fact that Donald Trump will be president in a matter of days, you’re not alone. I keep pinching myself hoping to wake from this crazy, insane dream to no avail. The good news is that we are makers and those of us who are upset can use the powers of handmade for good despite whatever nutty stuff is happening at the highest levels of government. 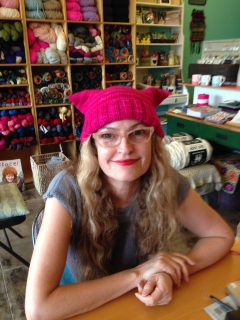 When thousands of protesters gather for the Women’s March On Washington January 21, 2017, the day after Trump takes the helm of our nation, there will be a sea of pink that just might inspire the former host of “Celebrity Apprentice” to once again regret speaking so freely while wearing a hot mic.

Like millions of Americans, I was disgusted when I listened to Trump’s lewd remarks about how he treats women. That’s why I had zero hesitation when I heard about the Pussy Hat Project co-founded by Krista Suh and Jayna Zweiman. Instead of sinking into a deep depression, these women have inspired legions of crafters across the country and around the globe to pick up their knitting needles and crochet hooks and stitch pink “pussy cat” hats to wear to the Women’s March on Washington, at local demonstrations in their own towns and in their daily lives.

Tune in to hear from Heather Robinson and Jake Sleutel who have hosted opening knitting events for knitters to come out and make hats their Craft Raft Studio in Grand Rapids, Michigan. The podcast also includes the story behind the Pussy Hat movement that started with a conversation at Kat Coyle’s yarn shop, The Little Knittery in Atwater Village, California.

While you listen, make a hat! The project website features plenty of patterns to knit, crochet and sew hats. 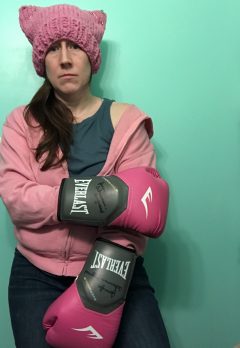 I’ve been boxing a lot since the election and spending quality time at the gym. This routine inspired me to knit a Knockout Pussy Hat. Check out my pattern below.

4. Flip inside out, divide stitches in half (24 in front and 24 in back) and complete a three-needle bind off using the size 11 double point. Fasten off, weave in ends, turn right side out and wear your hat as a sign of your commitment to stand

5. If you want to embellish the ears, pin three safety pins in the form of a triangle to each ear.

Interested in sponsoring an upcoming episode? Great, email me for information.

Just a question: were you as animated with demonstrative vitriol when your Democrat president, Bill Clinton, was for the most part (for those of us who trust women victims) proven to have violently raped Juanita Broderick?

What kind of cap did you knit for her?

hi!
Copper- Silicon Alloy offers added strength in conjunction with the self-lubricity of silicon for excellent bearing and load properties. This is especially useful when silicon bronze is used for bearing cages, raceways and spacers specifically for the aerospace industry.http://www.metal-pro.net/Other-product/Copper–Silicon-Alloy-30/

hi!
Copper- Silicon Alloy offers added strength in conjunction with the self-lubricity of silicon for excellent bearing and load properties. This is especially useful when silicon bronze is used for bearing cages, raceways and spacers specifically for the aerospace industry.metal-pro.net/Other-product/Copper–Silicon-Alloy-30/

Do you have a pattern for a “snowflake” hat.
Just Wondering…..

Howdy, i read your blog occasionally and i own a similar
one and i was just curious if you get a lot of spam remarks?

If so how do you protect against it, any plugin or anything you
can advise? I get so much lately it’s driving me insane so any assistance is very much appreciated.

Fantastic post but I was wanting to know if you could write a litte more on this subject?
I’d be very grateful if you could elaborate a
little bit further. Cheers!

I am genuinely thankful to the holder of this web
page who has shared this fantastic piece of writing at at this place.

Oh my goodness! a wonderful article dude. Thanks a ton Nonetheless I am experiencing trouble with ur rss . Don’t know why Unable to join it. Can there be anybody obtaining identical rss issue? Anybody who knows kindly respond. Thnkx

Hi there would you mind letting me know which web host you’re working with?
I’ve loaded your blog in 3 different internet browsers
and I must say this blog loads a lot faster then most.

Can you recommend a good web hosting provider at a fair price?
Thanks, I appreciate it!

We’re a gaggle of volunteers and opening a new scheme in our community.
Your website offered us with valuable info to work on. You have performed a formidable job and our
whole group shall be grateful to you.

Hey there, You’ve done a great job. I’ll definitely digg it and personally suggest to my friends.
I’m sure they’ll be benefited from this website.

This is a topic that’s close to my heart… Take care! Where are your contact details though?

This article will assist the internet visitors for setting up new web site or even a blog from start to end.

Hello, this weekend is fastidious for me, for the reason that this point in time i am reading this fantastic informative post here at my home.

Hi there to all, the contents present at this web site are actually amazing for people experience, well, keep up
the nice work fellows.

I got this web site from my pal who shared with me about this site and at
the moment this time I am visiting this site and reading very informative content here.

Hey! I just wanted to ask if you ever have any trouble with hackers? My last blog (wordpress) was hacked and I ended up losing months of hard work due to no data backup. Do you have any solutions to prevent hackers?

When someone writes an post he/she maintains the idea of a user in his/her mind that how a user can understand it.
Thus that’s why this paragraph is perfect.
Thanks!

you are really a good webmaster. The website loading speed is amazing. It seems that you are doing any unique trick. Also, The contents are masterwork. you have done a great job on this topic!