CraftSanity Podcast Episode 189 — The case of the phantom penis: Artist Kathy Nida responds to having quilt removed from AQS show in Grand Rapids 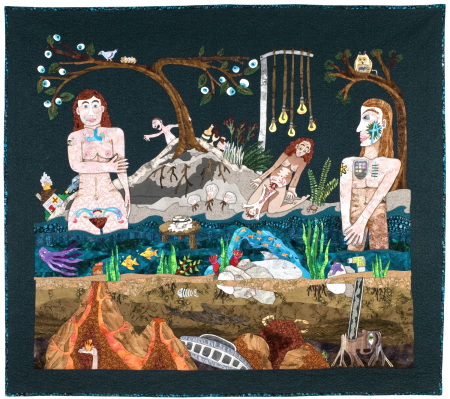 “I Was Not Wearing a Life Jacket” quilt by Kathy Nida

Kathy Nida is no stranger to quilt controversy. She unapologetically includes nudity in her quilts and once attracted a local news crew in Hampton, Virginia after her quilt depicting the vulnerability of homeless women shocked sensitive quilt show goers because it included a quilted vulva. 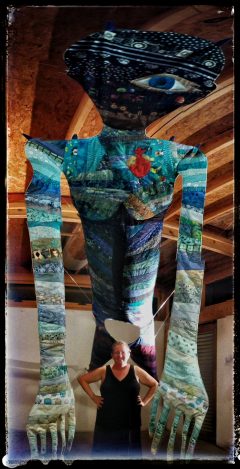 Nida has since shown her quilts in several shows around the country and has continued to feature human anatomy in her art without drawing fire – until her work was displayed in West Michigan earlier this month.

But this time it wasn’t a quilted vulva that caused the ruckus. It was allegedly something even more amazing – an absent penis.

Now for a little background. Nida had two quilts on display at the recent American Quilter’s Society Quilt Week in Grand Rapids, Michigan as part of a traveling exhibit of art quilts organized by Studio Art Quilt Associates that have been featured in a series of AQS shows. The quilts are a sampling of those featured in the book, “Art Quilt Portfolio: People and Portraits.”

Nida’s piece, “I Was Not Wearing a Life Jacket,” completed in September 2010 has been part of this national traveling exhibit of art quilts for several years.  The quilt, featuring nude females, including one giving birth at the edge of a river, was inspired by a disturbing dream and a real-life oil spill. It was on display at the AQS show in Grand Rapids along with her other quilt, “Fully Medicated” depicting the damaging effects of prescription medications on body. 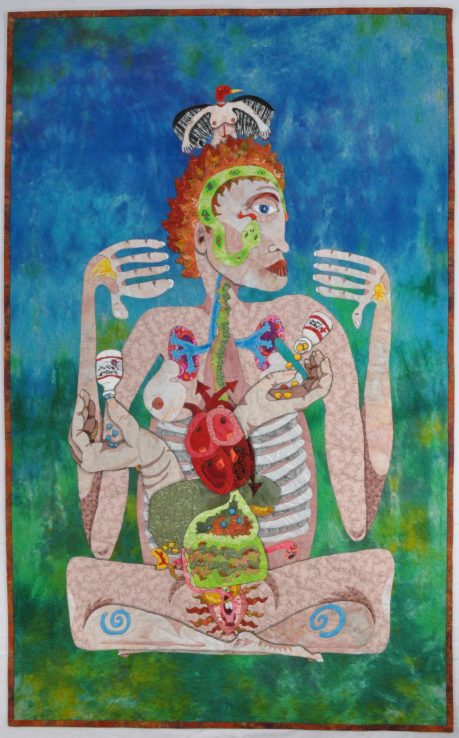 When Nida was contacted by organizers of the traveling SAQA exhibit and told a viewer was offended by the depiction of a penis in the first quilt described above, she was perplexed.

Tune in to this episode of CraftSanity to hear Nida’s frustrating story, but be forewarned that some mysteries will remain after the CraftSanity theme song plays at the end of the show. We will not learn who or how many people complained about the quilt or why AQS show organizers removed it for allegedly containing something it does not. I requested an interview with those who made the decision, but the AQS spokeswoman called me back a few hours later and said, “We have no comment.”

If the AQS folks change their minds and want to explain this, they know where to find me and I’m happy to give them equal time as I strongly believe open dialog is a very good thing when aiming to maintain the trust of the legions of quilters and enthusiasts who enter their shows, attend their events and spend thousands at the vender booths. *** UPDATE: Scroll down for a statement released on Aug. 23 by AQS.***

If we want quilts to be respected on the same level as art created in other mediums, it’s critically important that quilters, quilt enthusiasts and show directors give artists the artistic freedom and respect they need to create and show their work without limitation. Quilt censorship holds us all back.

Editors Note: If you look at a quilt that doesn’t contain a penis and you see one anyway, you may want to consult your physician if the hallucination lasts more than four hours just to be safe. : )

*** UPDATE: Two days after posting this podcast and several days after requesting an interview, I received this statement via email from Bonnie Browning, Executive Show Director for AQS:

“After receiving numerous complaints from attendees about a quilt in the SAQA exhibit, AQS removed the quilt from the People & Portraits exhibit at the Grand Rapids QuiltWeek event.

Prior to removing the quilt, the feedback AQS received was not limited to one isolated comment. Attendees reached out to AQS staff at the show and via emails and phone calls to our office.

Despite the removal of this quilt, AQS was able to display more than 700 other quilts at the show for viewing by the general public in Grand Rapids.”

Tell me what I should make with all this Kaffe Fassett fibric and I might give you some. : )

Your last paragraph says it all.

I have no comment about AQS, but what I do have to say is that once upon a time, free speech and expression were important, no more. Kathy even used the word trigger warning – which is ok in every university in America now. Why did you think that people have the right to censor speech and expression on campus because people are ‘uncomfortable’ but not in art shows. Of course people would notice that simply by saying ‘I’m uncomfortable’ things will get banned. Should have left speech and expression completely free at Universities, once the door was open to censorship, of course it would migrate to other parts of our lives.

Thank you for the shout out at the end, Jennifer. This was a really important and fascinating discussion and I’m so glad you recorded this podcast. I think AQS missed an opportunity to join the discussion and that, to me, is a real mistake on their part.

I saw both quilts on Friday, August 12, and I thought they were both wonderful.

[…] and craft podcaster, Jennifer Ackerman-Haywood, reached out to AQS and Kathy Nida to record an episode of the Craftsanity podcast in an effort to tell both sides of the story. “No one likes bad press or complaints swirling on […]

Censorship of any kind is dangerous, I was glad to hear this podcast and that you were able to interview Kathy so quickly.

Besides the freedom of artistic expression that is supressed, Kathy brought up a good point that I hadn’t thought of — these pieces can inspire other artists to break out of traditional practices and try new techniques, if they have a chance to see them – and it’s a loss to them and viewers when they’re missing.

I hope you feel better and recover quickly. Thanks again for another great episode.

[…] about it and apparently refused to comment elsewhere when asked to discuss it on podcasts (go here for the podcast with Kathy Nida and other info about it all) or their website. SAQA put out a statement saying that […]

So does that mean “no” censorship? Everything is acceptable? What if others are offended? No rules? Why are conservatives labeled “narrow”? Aren’t liberals narrow in that they want to have their way over any objections?

[…] about it and apparently refused to comment elsewhere when asked to discuss it on podcasts (go here for the podcast with Kathy Nida and other info about it all) or their website. SAQA put out a statement saying that […]

Usually I don’t read article on blogs, but I wish to say that this write-up very forced me to try and do it! Your writing style has been amazed me. Thanks, quite nice post.