There are days when life seems too good to be true. You know, those moments when you feel like you’re living out the movie version of your life and you wouldn’t change a thing about it? That was how I felt Saturday at the Girls on the Run 5K.

Don’t get me wrong, I was exhausted and suffering from a major craft hangover as I had stayed up until an ungodly hour the night before carving and printing patches for my daughters’ to wear during the race.  This pre-race patch-making has become a family tradition that could be done more reasonably, but I’m a craft extremist so there’s usually a fair amount of sleep deprivation involved in most of my projects. I also like to carve and print patches while my girls are sleeping so I can surprise them in the morning. (I write more about the patches later.)

So I was operating on just a few hours of sleep when we arrived at Calder Plaza in Grand Rapids, Michigan for the 5K, but I was happy to be participating for my third year as a parent and coach. And this year was particularly cool because both my daughters were on my team and my husband was running, too. 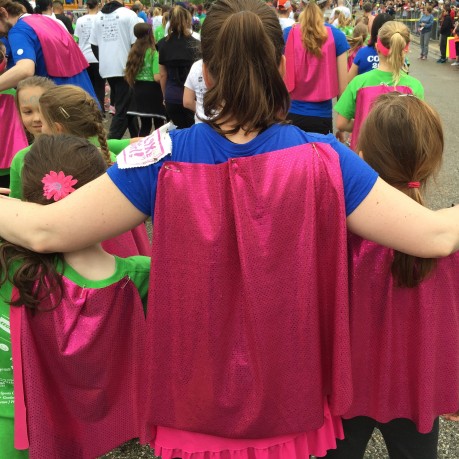 Saturday we were superheroes.

To prep for the race I bought an eight-yard bolt of sparkly pink fabric and cut out 35 running capes to pin on the backs of all three teams from my daughters’ elementary school. The fabric was a little pricey, but well worth it when I saw the girls’ reactions when we pinned the capes to the back of their race shirts. I wore a cape for this race, too. The girls also wore friendship pins on their shoes with each bead representing a practice lap. (Check out the video at the top of this post to find out more about how to accessorize your next fun run. And there’s another video tutorial on how to make a finish line at the end of this post.) 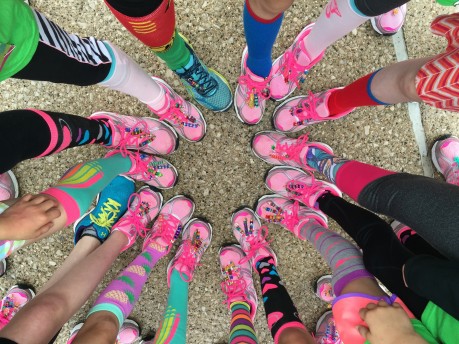 My family started the race together, but Abby, 11, started to pull away, so I picked up the pace with her and my husband, Jeff, ran with Amelia, 9. Last year I set the pace when I ran with Abby, but a lot has changed since then. I had foot surgery and my kid got faster, a lot faster. Although, in Abby’s version of why she pulled away at the end was different than mine.

“Mom, I was going the same pace the whole time,” she said.

And, maybe she was. This 5K is untimed and I admit that I’m lingering in a state of denial that my fastest days may be behind me. The fact is that there came a point in this run where I could tell Abby was holding back to stay with me and that’s when I told her go. She hesitated, so I had to make it clear that I wanted her to take off. “Go for it, Ab! You don’t need me to run you in. Do your thing!”

Abby looked over her shoulder a handful of times as she moved closer to the finish line and each time, I pointed and waved her forward. I couldn’t stop smiling as I watched her pink, sparkly cape flap in the wind behind her. The crowd support was fantastic and many spectators read my shirt and yelled “go coach” and “good job coach” as I made my way to the finish line about 100 yards behind my daughter. Since coaches are supposed to be helping kids to the finish line I felt like I needed to explain.

“I’m chasing my daughter,” I said pointing to the brown-haired girl with the pink cape up ahead. “That’s my kid!”

While chasing Abby, I came upon a runner from another school who was fading at the end. I introduced myself and ran her in and introduced her to Abby at the end before returning to the course to find Jeff and Amelia.

Before long I spotted them and jumped back into the race. I handed my phone off to Jeff and he took some very sweet photos of Amelia and I holding hands as we ran toward the finish line. (Thank you, Jeff.)

We took a finish line photo and then I returned to the course to support more runners sporting sparkly pink capes. Before it was over, I would cross the finish line four more times with runners from my team and what an honor and privilege that was. If you have a daughter in grades 3-5 next spring, I recommend that you sign them up for Girls on the Run. It’s such a great program to be a part of.

And because I believe so strongly in celebrating those finish line moments, I made a tutorial on how to make a finish line of your own for a practice 5K or fun run in your community. Have fun and remember to get those arms up and celebrate when you cross the line. : )

I am continually invstigating online for articles that can facilitate me. Thx!

Hello, i believe that i saw you visited my weblog so i got here to “go back the desire”.I’m attempting to in finding issues to enhance my web site!I suppose its good enough to make use of a few of your concepts!!