I rolled out of bed at 6:08 a.m. this morning, quite pleased that I only hit the snooze button once. I ate a bowl of Cheerios and then suited up in my triathlon gear and headed downtown to the Y.

I raced in the first heat at 8 a.m. The very nice woman in the next lane was in much better shape, so I had a pretty good idea of how it was going to go down. I went out fast despite my recent lack of training and wasn’t surprised when it became clear that I would not be able to hold her off in the pool. Not today. Not when my last distance swim happened a month ago during my last race. (Doh!)

We ended up tying at the final wall with a total of 34 lengths. From there I started to fade. After 15 minutes on the bikes, she blew me away on the track. I hung on for second place and tipped my hat to the winner who was visiting from out-of-town. After our race she went back down to the pool to race again. This woman is seriously hard core. (High five, sister!)

Recent illness and general busyness have led to a very sporadic training schedule of late. Race days aren’t as fun when you don’t do the prep work, but you know what, I’m okay with this arrangement because today was not about me. 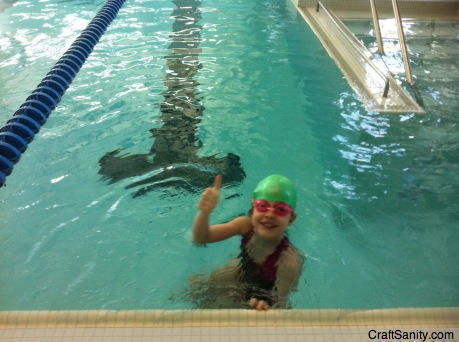 It seems I’ve buried the lead of this story. About a half hour after my race ended, my 7-year-old daughter, Abby, arrived on the pool deck to await the start of her very first race. While I counted laps for other swimmers and her dad and little sister settled into the bleachers above, she sat on a chair next to me and waited in her pink and black Speedo. I helped her put on her lime green swim cap, carefully tucking her long brown braids into the back and marveling at the fact that my baby is now big enough to compete in a triathlon. 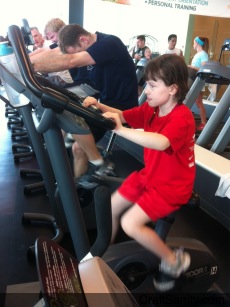 Every time she looked up and smiled at me between laps in the pool, I thought my heart would burst. She was so excited to race and so determined to keep going even when fatigue set in on the bike and the track. I’m just so proud of her.

A wonderful twist to the day happened before the race when Abby met a new friend, the daughter of an excellent athlete I met on the very same pool deck a few years ago. We’re moms who like to race each other and today our daughters took their turn. Our girls were not in the same heat, so they wished each other good luck and cheered for each other on the track. When the results were tallied, Abby finished second behind her new friend and my heart swelled once again when her response to earning a second place medal was to bear hug the first place finisher. (Full disclosure: There were only two girls in the 10 and under age group.) 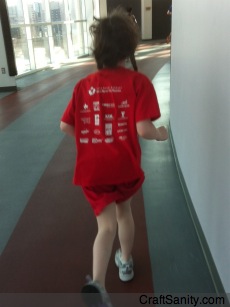 When parents get to watch their children take to a sport they love, it’s such an awesome thing. I’d take today’s experience of running with my daughter around the Y track – so she wouldn’t be nervous in a heat of fast adults – over achieving any personal goal I’ve set for myself. Time will tell if Abby decides to continue racing, but we’ll always have the memories of her first race. Today was a great day and I’m so grateful to have lived it. I dreamed of days like this.

Hey, Michigan quilt lovers! This giveaway is just for you!

I’m really doing it this time: A fall...

Reinvention: The search for purpose and meaning in...

Fuller by Design Interview: Jennifer talks about the...

Ari,Thanks for doing this interview and lnoikog forward to Rice’s next interview with you. Glad to hear you’re thinking big. And to my delight I think your focus on 70 and over is a good thing because these wise teachers have become invisible.Your memories make me think of my own memories with my grandmother. She was fun, kind, generous and sweet with lots of wisdom. These older people could sure teach young people some good manners, etiquette and life lessons about how to be kind and patient with one another. Grandmas know how to attend to the “small” things in a child’s life which bring the most joy.(like sitting on the bed and clicking your heels before watching TV) I can tell you really miss your Grandma. I think by the time you reach 70 you can d–n wear what you may please. How dare a society ignore our wisdom keepers and then have the audacity to tell them what to wear. Thank you for your efforts to carry your message of “hope” for older people on this planet.I’ll keep my fingers crossed that OWN will break out their set age demographic and embrace the “hip” elders.