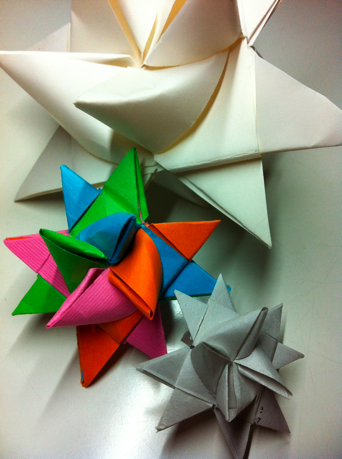 Learning to make German stars has been on my to-do list for a few years so I’m very happy to report that I have finally joined the ranks of those who know how to fold ’em.

I’m not going to lie, I swore a lot (a whole lot) while folding my first star. (Don’t worry, the kids were asleep and out of earshot.) The fact is that folding German stars is a skill that comes after a bit of a learning curve. Those who get a reasonable amount of sleep, will likely have less difficulty mastering this holiday craft project. If you’re feeling a little sleep deprived, I recommend that you make your first star while barricaded in a room by yourself just in case you’re prone to off-color muttering.

In an attempt to help minimize your frustration, I recorded a local expert folding a star (Thanks Jan!) and then I decided to make you a photo-illustrated tutorial to help you master German star making. The ironic part is that I swore the most while putting together the tutorial. At my lowest point when I couldn’t get my photos to upload, I was starting to believe that visiting with each of you personally would be easier than finishing this tutorial. But I kept going with it and I hope you think the results are worth it. Ok, now that I’ve gotten you all pumped up with my up-hill-both-ways tale of technical difficulty, let’s get to it. :  ) 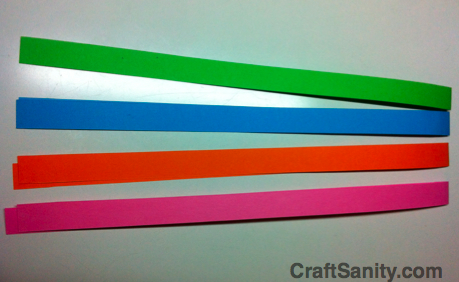 First, we need to our paper ready. Cut 1/2- inch strips of card stock paper measuring 11″ long in four colors. You will need two strips in each color for a total of eight. To create nice long strips, overlap the matching strips and use a glue stick to glue each pair of 11″ strips together to create strips measuring approximately 21″ in length. (If you have extra long pieces of paper around, you can simply cut 21″ strips and skip the gluing. Now carefully fold each long strip in half. And interlock them to form a basic basket weave as shown below.

*NOTE: You can make these stars using all the same color. In fact, that’s what most people do. I’m using four colors to make the tutorial instructions easier to follow. And please pardon my creased paper, technical difficulties forced a couple “redos.” 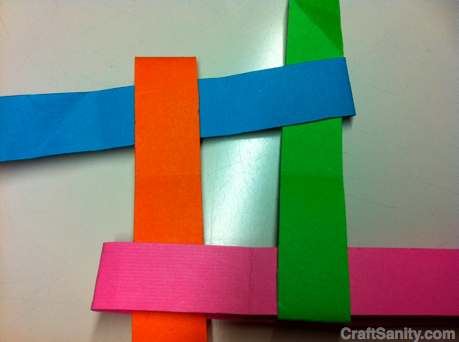 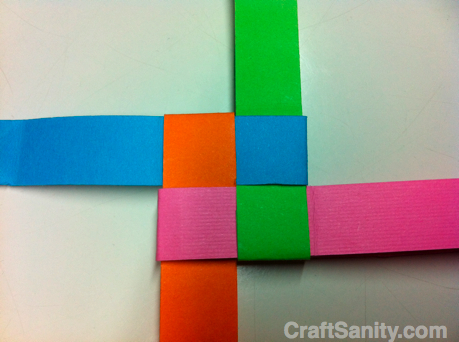 Now, flip it over. The back should look like this: 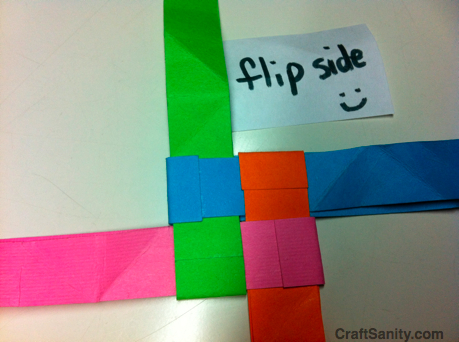 If the back doesn’t look like this, don’t worry. Just adjust the strips until it does. You can totally do this. And don’t worry about the connections where you glued two pieces together. You won’t be able to see these when you’re done.
Ok, you’re doing great. Now, weave the strips again working with only the top  layer of strips as shown in the next set of photos. 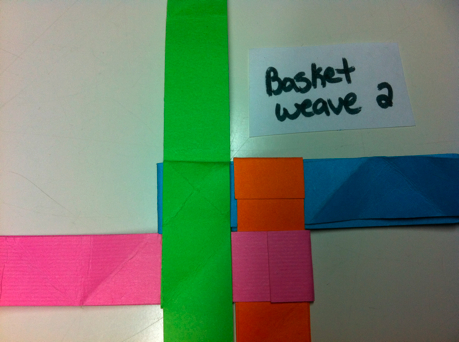 First, fold a green strip down. 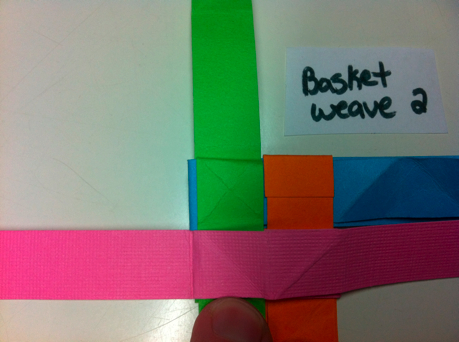 Next, fold a pink strip across the green strip. 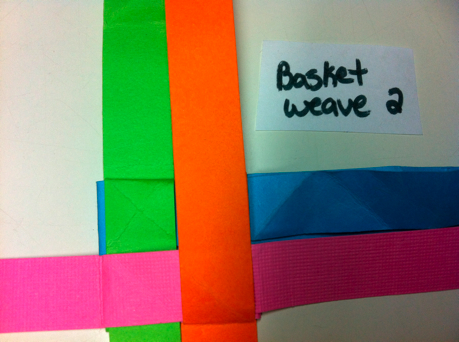 Now fold the orange strip up over the pink. 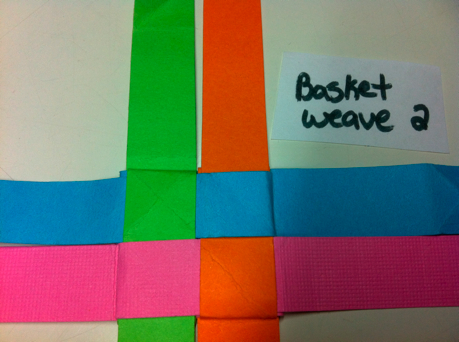 Now fold blue strip over the orange and weave it under green.
Awesome. The backside basket weave is complete and now you’re ready to fold the points.
To create the points you will repeat the steps shown below, folding four points on on each side to create an 8-pointed star. Here we go… 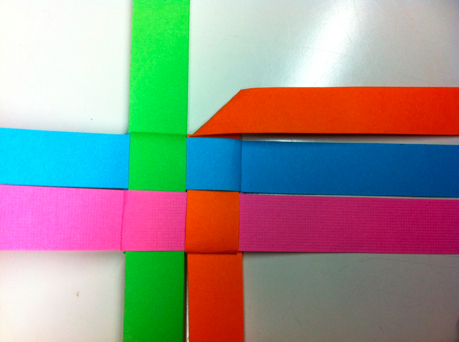 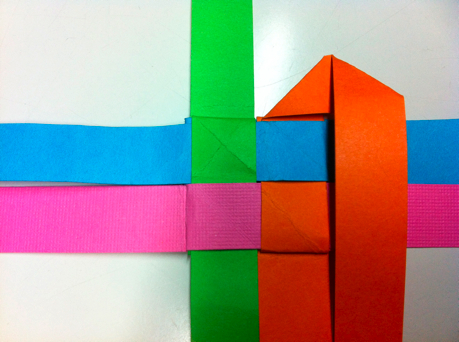 Now fold the orange strip on the diagonal back toward the left so it is now parallel to the first orange strip. 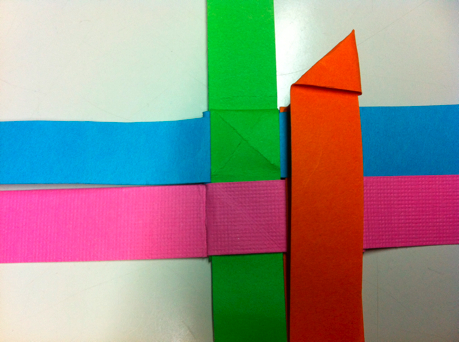 Now, fold the orange strip you’ve been working with to the left onto itself. 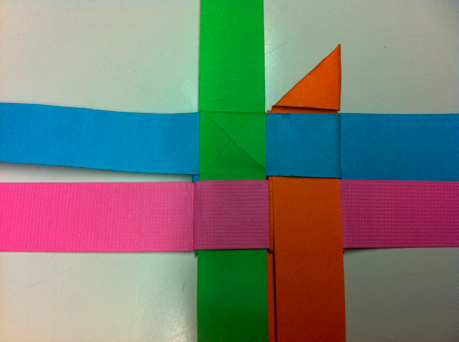 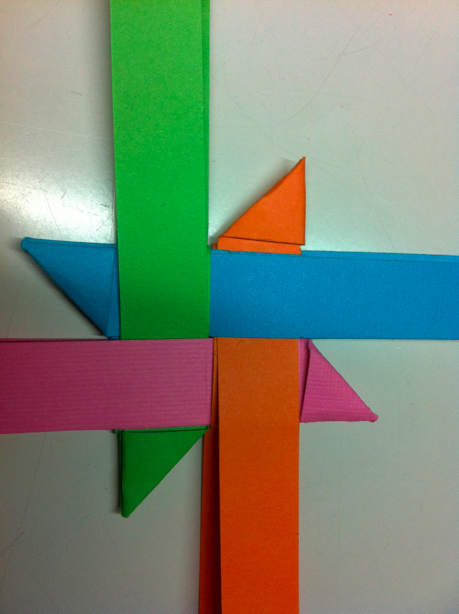 Now you’re ready to flip over to the other side, and fold the last four points. 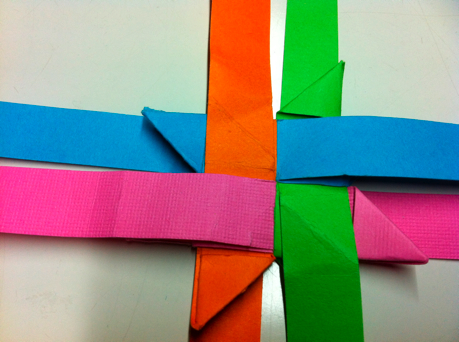 Alright. Now we’re to the part that inspired a bit of swearing at the CraftSanity Headquarters. This is when it gets a little tricky, but I know you can do this. And once it clicks, you’ll be able to fold these stars in your sleep.
Deep breath. (I’m talking to myself here. I really want to do my tutorial writing job well for this part especially.) 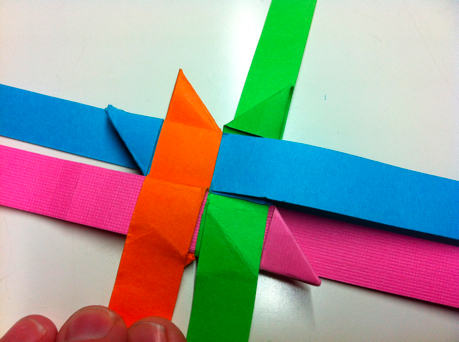 Now fold down the top orange strip to get it out of the way and pick up the blue strip at the top right and get ready to perform some craft magic. (Since photographing this tutorial, I have started to snip the ends of my strips to points. This significantly speeds up the process of folding the center points.) 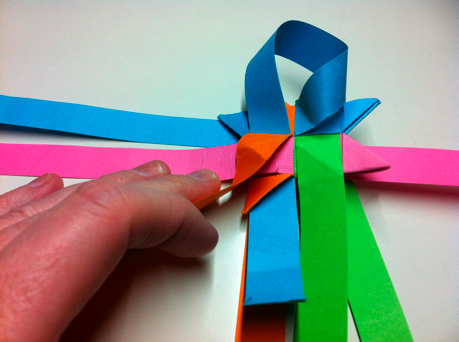 This is the grand finale of the German star. Take the blue stripe and loop it around so that the top of the strip that is coming out from under the orange strip (to the right) is still facing up when you wind it around and weave it under the orange strip you moved out of the way and the pink strip that is woven horizontally. Pull the blue strip end gently to tighten and shape that twist into a nice point.
This is what the center first point will look like when you’re done: 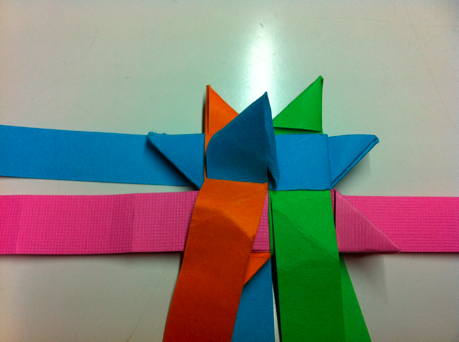 Now you’ll be making the orange point and you’ll need to fold the pink strip to the left over the green at the right to get it out of the way and fold the orange strip just like you did the blue strip. And then repeat for the last two strips until it looks like this:

Folding the center points is a bit of a mind bender at first, at least it was for me. But you will get it. And because it is a little tricky, I made a short video clip to help you out.
Now flip your star over and fold the center points on the second side. When you are done, trim the excess paper off and raise your arms in the air! Victory! You are a crafting rock star! High five! 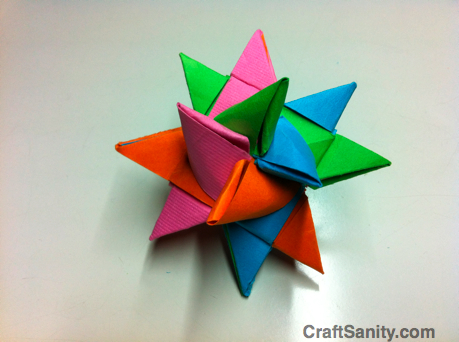 To get your German stars tree-ready, punch a small hole in one of the points and string yarn or fishing line (my favorite!) through. Before you hang them on the tree you can dip them in wax to coat them if you wish, but I haven’t gotten that far yet. I’ve been too busy writing a tutorial on how to fold them. :  )
Happy holidays!
5 comments
0
FacebookTwitterPinterestEmail

We Are Makers. This Is What We Do.

Howdy! Would you mind if I share your blog with my facebook group? There’s a lot of folks that I think would really appreciate your content. Please let me know. Many thanks

You can find definitely a whole lot of details like that to take into consideration. That’s an excellent point to bring up. I give the thoughts above as general inspiration but clearly there are actually questions like the one you bring up where the most important factor is going to be working in honest excellent faith. I don?t know if finest practices have emerged around factors like that, but I’m positive that your job is clearly identified as a fair game. Both boys and girls really feel the impact of just a moment’s pleasure, for the rest of their lives.

Hey there this is somewhat of off topic but I was wondering if blogs use WYSIWYG editors or if you have to manually code with HTML. I’m starting a blog soon but have no coding skills so I wanted to get guidance from someone with experience. Any help would be enormously appreciated!