CraftSanity on TV: A spring break craft with the CraftSanity vice-presidents of fun 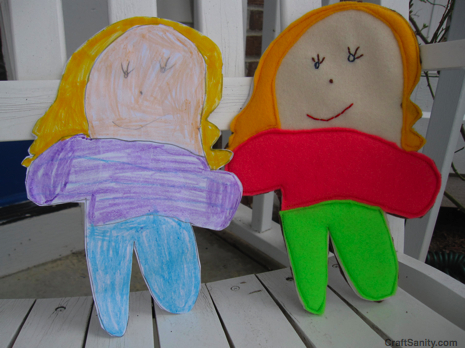 It rained for most of Spring Break Stay-cation 2010 here in West Michigan. Thankfully my girls and I are pretty crafty and well stocked for a bit of creative play inside. Inspired by the book “Flat Stanley” by Jeff Brown, the girls made their own versions of Flat Stanley and went on to create Flat Sally, flat monsters and even a flat dog with six legs. (I think the artist lost count while making that one.)

In the the book a boy named Stanley is flattened by a bulletin board. He has several adventures in this smooshed state including going on vacation via the U.S. Postal Service. The girls took their drawings around town and we took digital photos. They’re planning to mail them to their cousins soon, too, in the hopes that they will photograph Flat Sally on a new exciting adventure. We decided to make reinforced Flat Sally out of felt and stiff interfacing, so she will hold up better than the paper version and not sag or blow away during photo shoots. (Another option is to laminate the paper version.)

I was planning a completely different project demo for Friday’s craft segment, but changed my mind when the girls insisted that the world needed to meet Flat Sally. So to add a bit of spring break excitement to the mix, I brought Abby, 5, and Amelia, 4, along to help me with Friday’s “Take Five” segment. It’s a risky move to bring the CraftSanity vice presidents of fun on live TV, because there’s no telling what they’ll say. Check out the video below to see how it went:

Tell me what I should make with all...

Calling all Cat Ladies!! On this blog tour...

Video Tutorial: How to use the automatic needle...

Adventures in Soap Making: A Review of the...

Soccer Mom vs. Everything Else