Get Ready For a Sidewalk Chalk Flood in Downtown Grand Rapids 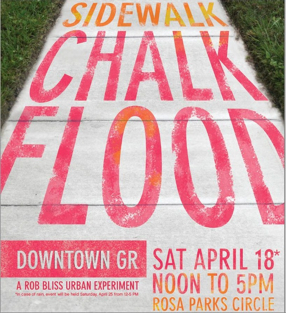 There is a very creative dude kicking around Grand Rapids, Mich. and he’s a total whiz when it comes to organizing large scale social experiments.

Rob Bliss is a Grand Rapids Community College student who has been using Facebook to pull together large crowds. So far, he’s successfully organized zombie walks and massive pillow fights.

This weekend he’s inviting thousands to join him downtown for a Sidewalk Chalk Flood and I’m bringing the kids and a big bucket of chalk. I think it’s going to be a blast to do something creative in mass.

Check back here for a full report.  Or better yet, come downtown and get involved if you’re local. It would be cool to see some familiar faces at noon Saturday at Rosa Parks Circle.

CraftSanity Episode 96: An Interview with Jenna Woginrich, author of ‘Made From Scratch: Discovering the Pleasures of a Handmade Life’

Tell me what I should make with all...

Calling all Cat Ladies!! On this blog tour...

Video Tutorial: How to use the automatic needle...

Adventures in Soap Making: A Review of the...

Soccer Mom vs. Everything Else